Dublin can be prohibitively expensive. The capital of the Emerald Isle has been hard hit by the global recession, and the prices reflect this. But Dublin is well worth visiting. The locals are among the friendliest in Europe, the city is safe and easy to navigate, and there are plenty of bargains to be had. Home to some of the world’s most colourful characters, including Jonathan Swift, Oscar Wilde, W.B. Yeats and James Joyce, the birthplace of Guinness has hundreds of beautiful and ancient buildings, and the accents are (in my opinion) gorgeous.

So with flights from just £16 return from Birmingham, I decided to pay Dublin a long overdue visit.

Here’s a list of my top things to do which cost under €20. 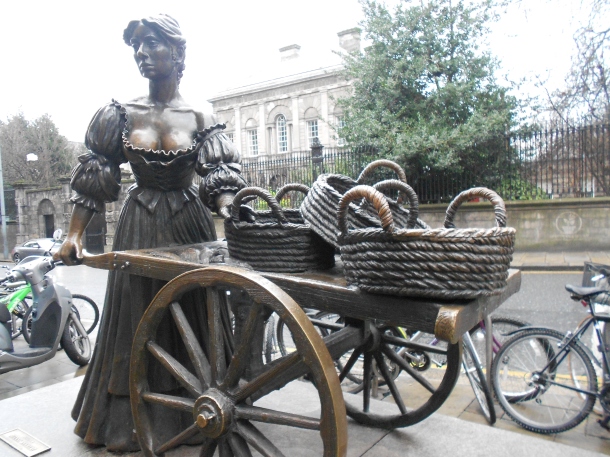 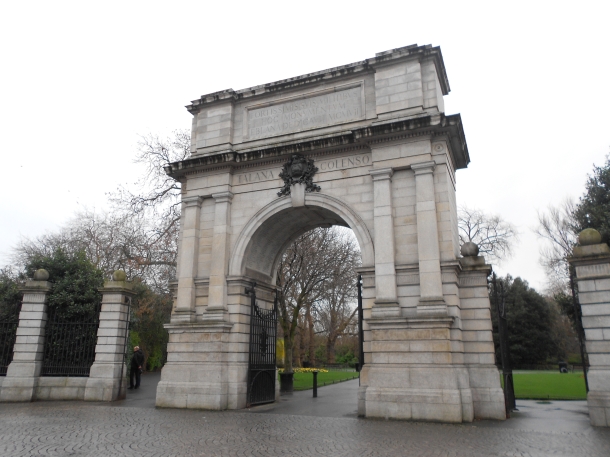 This might sound like a bit of a cop-out, but Dublin is built for walking around and is extensively signposted. Visit the tourist center off Grafton Street for a free map, and set off on foot. If you get lost there’s always a friendly local to help you out, and because the city is so small you can cover most of its sights in one day.

You can wander around Trinity College, Chester Beatty Library, the General Post Office, Christchurch Cathedral, St Stephen’s Green and (the outside of) Dublin Castle for free.

O’Connell Street and Grafton Street are both home to hordes of very talented buskers and feature some of Dublin’s best shopping and free sights. 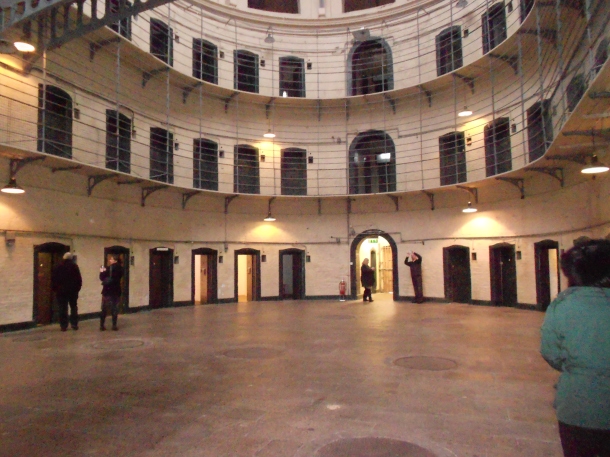 This was my absolute favourite thing to do in Dublin. For just €2 (student price) you can go on a guided tour of Dublin’s oldest and most notorious jail, Kilmainham, known as the Irish Bastille. My guide was an absolute gem. Despite a penchant for socks and sandals in the middle of winter he was incredibly knowledgeable and friendly. It’s likely you’ve already seen its gloomy interior – many famous films and TV shows have been filmed there, including The Italian Job and Michael Collins.

The prison, closed in 1924, was home to some of Ireland’s most eminent political prisoners, including those involved in the 1916 Easter Rising – your guide will tell you the stories of rebel leaders such as Robert Emmet, Jeremiah O’Donovan Rossa, and Charles Stewart Parnell.

Visits are by guided tour only, and last an hour. There is also an informative on-site museum which details the development of the prison from its opening in 1796 to its emergence as a hotbed of Republican martyrdom in the 1900s (over 150 men were hanged here.)

3) Unleash your inner Viking at Dublinia

A trip to Dublinia is well worth the €6.50 entry fee (student discount.) Take an amusingly interactive tour through Viking and Medieval Dublin. Photo opportunities are abundant – you can dress up as a Viking, walk through a medieval merchant’s house, experience  a 16th century fair, and grimace at ancient illnesses and diseases. As a history geek I was beyond impressed with the time and effort put into the museum. Great fun on a budget price.

4) Bus tour – because your feet are worth it.

Like most capital cities Dublin is home to an abundance of distinctive tour buses designed to shuttle tourists around the most famous sights. Confession: as touristy and gimmicky as these buses are, I love them.

Bus tickets include a free walking tour. There is also a Ghost Bus tour for the supernaturally inclined.

5) Get spooked at Glasnevin Cemetery

I visited on a Monday-Tuesday – unfortunately during the off-peak months most tours only operate on a skeletal basis (weekends generally) which meant that I had to miss out on a guided tour of Glasnevin Cemetery. Tours operate at 2.30pm on Wednesdays and Fridays.

Entry to Dublin’s national museums is free. (The words every budget traveller longs to hear) Check out the Irish Museum of Modern Art and the National Gallery of Ireland. The Natural History Museum (also known more colloquially as the Dead Zoo) is also open to the public.

7) Learn how Guinness is made

Dublin’s main tourist attraction is the Guinness Storehouse. A ten minute walk from the Temple Bar area, the storehouse has pulled in over four million visitors since it opened in 2000. Climb up to the 7th floor to the Gravity Bar to get a panoramic view of Dublin – which you can enjoy with a complimentary pint of Guinness.

Tickets are €13 (student discount). Book online for a 10% discount.

A trip to Dublin wouldn’t be complete without a trip to one of Ireland’s many pubs. The locals are friendly, the selection of alcohol is mind boggling, and most pubs have a local band playing traditional Irish music to their customers.

For those with more cerebral inclinations, there is a Literary Pub Crawl which combines pint drinking with learning about some of Dublin’s most well-renowned citizens, including Jonathan Swift and James Joyce.

Budget: Flight -from £16 return with Ryanair from Birmingham.

Tip: If you’re a student, take your student card! Most main attractions give considerable discounts to students, I saved over €15 by using my university card. Most attraction websites and brochures tell you that they only accept ISIC cards, but my Sheffield university card worked fine.

One thought on “A cheap weekend break in Dublin”