Before I arrived in Cambodia, I knew nothing about its islands. I’d certainly never heard of Koh Rong, also known as Monkey Island, but after speaking to some backpackers in Sihanoukville, I decided it was a must-see.

Koh Rong could easily knock a few rounds out of some of the Thai islands I visited: long, white beaches, clean turquoise water and an appealing remoteness, particularly in low season when I felt like I had the entire island to myself. (Cue Robin Crusoe fantasy sequence.)

Getting to the island is pretty straightforward. Boats leave from Sihanoukville’s port every day at 12pm. A return trip costs $20. Getting onto the boat is the hard part – the crew place a narrow gangplank between the pavement and the boat, resulting in a thoroughly terrified crossing from everyone involved, and much laughing from the crew.

The boat that rocked (vigorously)

The journey started out fine. It was an overcast but dry day, I took a seat and got out a book, happy to read the hours away. But the sea had other plans. Twenty minutes into the two and a half hour journey it let us have it. I’ve never been a huge fan of boats. I’m a crap swimmer who hates so much as being in a swimming pool, so being on a rickety device crossing over water which was certainly deeper than I am tall freaked me out. It had no proper seats, just benches, and the low sides offered no protection from the water’s rage.

In less than ten minutes I was completely soaked. I huddled miserably in the middle of the boat, using the pile of backpacks as a (fairly ineffective) guard. Soon after, a member of the crew disappeared into a cupboard. He returned with an armful of neon yellow lifejackets. ‘Who can’t swim?’ he asked the boat. Everyone laughed, until the serious look on his face told us he wasn’t cracking a joke. A massive Titanic-esque scrum for the FOUR jackets followed. I spent most of the rest of the journey praying that I wouldn’t drown before I got to see Angkor Wat, and shooting evils at a woman who’d elbowed me out of the way to secure her prize.

I got off the boat, shaky and sodden. But wow. Koh Rong was definitely a sight to behold. Even in the torrential downpour it looked beautiful. Stupidly I forgot to pack my camera charger, and it died within minutes of me stepping foot onto the island, so apologies for the word heavy post.

A little slice of heaven off the Cambodian coast

I stayed at Monkey Island Beach bungalows, gorgeous little beach huts handcrafted by the island’s inhabitants. There are only 20 of them, so booking in advance is a must. The huts are fairly expensive, at $20-30 a night, but they sleep four people, which brings the cost down drastically. They’re basic, but that’s the point of Koh Rong. An ostentatious hotel chain would be so grossly out of keeping with the island’s charm.

The island suffered some rolling blackouts while I was there, and electricity was turned off after 9pm. But that’s what made it so great. I spent the evening in a bar on the beachfront. After the third power cut in less than 15 minutes the bar’s congregation began spontaneously singing Call Me Maybe in the darkness until the lights came back on. Watching old Khmer men belt out Carly Rae Jepson is something I never want to forget.

Chatting to some of the bar owners brought up the topic of development. Apparently there are rumblings of high-end luxury resorts on the horizon. I say, get there soon, and enjoy it as it is, remote, beautiful and unspoilt. Before the inevitable influx of paved roads, ATMs and convenience stores.

The next morning I woke up to see a cow resting its head on the porch and the sun’s rays burning down. Yes! I wrung out my still dripping clothes and set off to discover what the island had to offer.

The main reason to visit Koh Rong is for scuba diving. It’s probably quite obvious that someone who doesn’t like wading into water past their knees doesn’t dive, but there’s plenty for the non-diver to do.

I spent the day exploring the pristine beaches and lush forests (after my first bacon sandwich in Asia at Monkey Island bar – heaven) before catching the return ferry back to Sihanoukville. This time it was a boring journey, no waves, no getting drenched, and no life jacket scrums. Bliss. (For those travelling on the ferry in better weather, take some sunscreen and have a snooze on the upper deck.)

*Warning* – Return tickets to Koh Rong include free transport to and back from the pier. Some unscrupulous tuk tuk drivers were attempting to persuade passengers that the free shuttle back needed to be paid for, and offering a ‘cheaper’ return in their tuk tuks.

Have you been to Koh Rong? What did you think of it?

2 thoughts on “Koh Rong – a little slice of Cambodian paradise.” 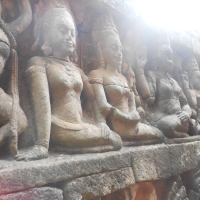